Vultor is the main antagonist in the animated movie,

The Adventures Of The American Rabbit. 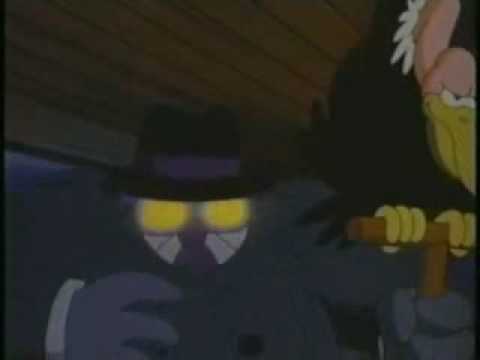 He first appeared as a mysterious clothed figure with a hat and sunglasses and was nicknamed "Walt". Vultor and his Jackal henchmen tried many ways to stop Rob (aka The American Rabbit) and his friends.

When they arrived in San Francisco, they kidnapped the Chocolate Moose and his son and rented the Statue Of Liberty for a day. Later Vultor threatens to blow up the visiting public with dynamite, but The American Rabbit clobbers him, only to reveal himself as the buzzard, his true form. After he threatened to blow up the Statue Of Liberty, he forced the American Rabbit to deliver the announcement. Vultor and the Jackals are now in control of the city, but it wasn't long til the townspeople turned on the Jackals, and Bunny, Teddy, Ping Pong, and the White Brothers read the announce about the Chocolate Moose was having a baby son in 1634 and overlaw the moose's castle. Vultor banishes the Jackals, and dismissed them as traitors and swears that he will destroy the American Rabbit, The Chocolate Moose's son (and the city) once and for all with his doomsday switch. Luckily, Rob cuts the power of Niagara Falls, deactivating the doomsday switch. Then Vultor come face to face with the American Rabbit in a final battle, but the Rabbit chases him into a blizzard and refused his offer to join forces with him. Vultor makes one last attempt to kill the American Rabbit by diving at him, but misses and destroys into the hill to his death.

Retrieved from "https://nondisneyvillains.fandom.com/wiki/Vultor?oldid=8701"
Community content is available under CC-BY-SA unless otherwise noted.